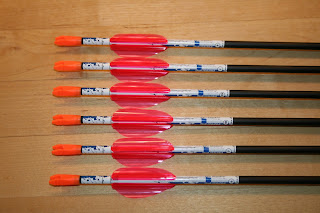 Soooooo....
After a long time some words to my site also..
I have been shooting like a ones a weeks after the F2F and it has been a good idea to do so. To take some time to do something else also.
Got my new arrows and wraps, thanks to Timo, he chose the wraps and they are looking pretty nice. Now I have been tuning the new GreenHorn riser (golden one) to my winact limbs. So little change to the bow, but it works as good as the red one. Next time some fine tuning, because the 18m is still a little to the left. We can shoot inside up till 45m and all the distancies has been nicely to the yellow and the max distance is also under the nock, so no problems there.

We made the new goal for the season and it's gonna be a medal from the European Field Championships from Italy, what else ;). Mid goals are to win in the National Championships inside (18m) 26.3 and field NC 20.8.
Now shooting a little more, like 2-3 times / week.
Posted by The Pasi at 8:08 PM

HAVE A GOOD ARCHERY YEAR CHAMP !!!