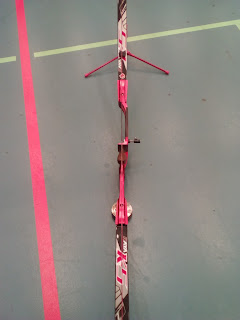 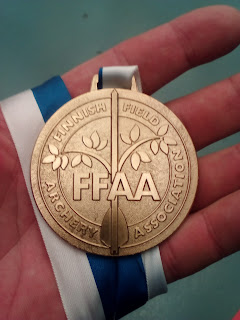 So today was the IFAA 20yard 60 arrows National championship in Riihimäki.
Started at the morning to clean some extra weight from the bowcase, So took out second riser and couple pair of limbs. That was okey until in Riihimäki, like 40min from home realise when put the bow ready, that I had only two upper limbs only with me. Thought couple minutes what to do and realise that can't do anything else than just put the limbs to the bow.
So in the warming up arrow noticed that the bow works okey and could shoot with it. There is not so big different with the upper and lower limbs, so I could do it..
But the competition was a bit strugling with the aiming and releasing. We fight with Pertti to the last bit from the first place. Half way we had some 4-5 ppoint different for me, but 3 sets later he was only one point behind. We shot the last 3 sets with the same points and I ended to the first place with one point difference. But that is enough and got the gold medal.
Posted by The Pasi at 9:48 PM